The MONOLITH EDITION is here.

The Monolith Edition features an entirely new layout, revised and edited text, and mechanical tweaks to the classic Extracausal experience.

The Monolith Edition also introduces Sets - packages of new character and story options for tables that want to start with some more concrete inspiration.

The Monolith Edition adds more introductory material to help orient tables and players who might be new to tabletop role-playing games, as well as more examples of play that highlight the major elements of the game.

This is Extracausal; a role-playing game about creating and uncovering a dense web of the paranatural, the occult, conspiracies, and of things far beyond it all. This is a game of encountering that which is extracausal. Imagine the Magnus Institute, the Federal Bureau of Control, Southern Reach. All groups that are involved with forces far greater than they could ever imagine, filled with individuals who piece together clues and secrets in the hopes of knowing the unknowable.

Extracausal features an easy to pick up dice engine, and simple character and world creation. Play as characters in far over their head as they race to uncover the truths about the strange, vast, dangerous, unknown forces of the extracausal. Create secrets and narrative elements that you later change, warp, shift, to form an emergent narrative web. Embrace twists and sudden reveals as you link together disparate elements into a larger, sprawling story.

Will you reach a shaking revelation? Or will reality be eclipsed by strange darkness? Play to find out.

Click this link to get a sheet template for use with Role!

Extracausal is the recipient of the prestigious Sandy Pug Games Award for "Cosmic Horror But Better". Huge thanks to Erik for the nomination.

In order to download this game you must purchase it at or above the minimum price of $20 USD. You will get access to the following files:

When you buy a copy of Extracausal you help someone else get a free copy. For each copy bought, one copy gets added to the community copy pool. One copy is also added for every additional $5 over the regular purchasing price and for every 5 star rating left here on itch.io!

If you are unable to purchase Extracausal  for any reason, please grab a community copy!

Hi, this sounds like the kind of game I'd be interested in, but I prefer my games in physical form. Any option for a printed version?

Thanks for the interest! Unfortunately no print options right now. You are more than welcome to try to do a print-at-home sort of deal, though the page dimensions are square so it might take some adjusting (maybe the epub version would be easier? I haven't looked into that though). Definitely considering print for the more distant-ish future, and should that happen I will make sure to post about it on the game's page!

My god these page spreads are pretty

I got this from a bundle a few months back, but only found i had it and read it through today. And wow. I can say without a shadow of a doubt that this is the RPG for me- I don't have the right group yet, but the rules of Trophy mixed and manipulated to more perfectly define something just a little bit less real is exactly what I've been looking for and could not find in other horror-adjacent RPGs i have seen. I cannot wait to find the right group to play this with and really get a chance to evoke the feelings.

I'm in the process of modifying this for my personal taste and for the mythos mine own, but there's not  a lot I need to change to get the vibe aligned. Thank you for the truly wonderful reading experience and game, Mr. Hittie.

Wow thanks! I'm glad you're enjoying the game! When you get a chance to play it I'd love to hear how it goes, I'm always interested in hearing what works/what doesn't for each group.

Good luck with your modifications, and if you've got any questions about the game, feel free to drop them here or get in touch on twitter/etc.

Also keep an eye out in the next couple of months for the next update!

Extracausal is a lush, intense, Trophy-system game about interacting with a vast and interconnected occult. Its art is bleak and atmospheric, and it takes notes from the I-can't-honestly-say-yet-whether-it's-mainstream-or-a-cult-classic game Control---but it might just as easily work as a lighter conversion for something like Unknown Armies or Delta Green.

Extracausal is 29 pages, and it's got a fair bit of text, so for a short game it's going to feel hefty. However, it's also self-contained, so you don't need a copy of Trophy to play.

You *do* need to have played/run other trpgs before, since it assumes you've already got a strong grasp of the fundamentals, and this might potentially wall out some people who would otherwise be interested in the SCP vibe of the game.

Mechanics-wise, Extracausal is well-tuned for suspense and horror. You generate a pool of dice by invoking elements of your character, and certain elements when invoked complicate a scene. Getting dice from injuries makes those injuries relevant to the scene. Getting dice from the supernatural makes it more likely to intrude and overshadow you. It's neat and atmospheric, and leans just to the storytelling side of being gamey and crunchy.

One thing not really featured in Extracausal is sample mysteries, monsters, agencies, etc, so you may want to bring your own mythos to the table if you're not confident in your ability to freestyle a gigantic conspiracy during the first session.

Overall, I'd recommend this to anyone who likes X-Files, or any of the other media I've mentioned so far, and who wants a story-first game of suspense and occult horror. If you're looking for the same, but crunchy, this is probably not your jam. And if you're looking for a prepackaged setting, this doesn't provide that. Otherwise, I absolutely encourage you to check it out.

-Apcoalypsis and Tenebrae being able to be set back feels like it bleeds out some of the tension from the game. At the same time, the vagueness of when to advance those tracks makes the escalation of tension feel a little arbitrary. Maybe tying them to choices at the end of modules might help? "If you did W, gain Apocalypsis and lose X", "if you did Y, gain Tenebrae and gain Z."

Wow! Thanks for the review and comments! I'm definitely working on making the game more approachable to people new to role playing games, and those updates are also going to be accompanied by a set of example settings (hopefully available sometime toward the end of summer).

You've also inspired me to take another pass at Apocalypsis and Tenebrae, which honestly yeah, could use a little more heft/instruction/guidance with how to use them.

Seriously, thanks again for taking the time to comment!

No worries! And I really dig Apocalypsis and Tenebrae as mechanical concepts.

Just purchased this game and have read through it. I'm not sure I'm sold on the collaborative mystery aspect, partly because it seems like it would require a lot of suspension of OOC knowledge. However I won't knock it til I try it.

What I will knock is the lack of conceptual footholds provided. Giving lists of vague names with a few adjectives might as well be giving nothing; the table entries were too little for me to build off of or visualize, and there's really no other "meat" to this game. The rules seem clean enough, on the simple side but that's fine. But if you opt for a simple ruleset you need the game's tone, themes, etc. to carry it. I don't feel like that's happening here.

I understand wanting to leave things broad so players can do what they want with the system, but at a certain point you need to commit to some things for us so there's somewhere for us to build from.

Hey thanks for commenting, I really appreciate the feedback! I hope you get a chance to try the game to see how the collaborative aspects of the mysteries unfold, it's very different from more traditional games, and sort of uses different "muscles" so to speak, but it can be a lot of fun (some other great examples to check out include Balikbayan and Sleepaway).

On the subject of not enough meat, I wanted to try and strike a balance between leaving things open for players to iterate and create, while still giving some level of example foundation. Though, perhaps that foundation relies too much on being comfortable with the aesthetic touchstones (not that that may be your case I'm just speculating!)

I ideally want to provide enough tools for anyone to be able to create in this space.  Some specifics that I am working on for the next update include, a greater variety of tables, further play-examples, and better explanations of the narrative conventions referred to in the text. I'm a little hesitant to add more detail to the backgrounds/artifacts tables as examples, as I find part of the fun is discovering the meaning of the aspects through active play (and in practice, both as a player and facilitator that's been the case so far). But still, are there more specific tools you would find particularly helpful? All feedback is important in shaping the game, so again, I really appreciate yours!

this is a neat game, and as someone who adores the genre this is meant 2 portray, it got me very very excited!!

in terms of feedback, i do think its worth saying that some descriptions of the more narrative portions of the game can be a little vague? it was easy for me to figure out what "bring into play / emerge in the current scene" means for example, and i'm very familiar with the concept of framing and playing out scenes, but someone less accustomed to ttrpg conventions might find themselves a little bewildered and unsure of how to go about play?

that said, this looks very fun and i fully intend to play it in the future :O!!

Hey thanks for the feedback I super appreciate it! And I do agree with that analysis, my initial focus wasn't necessarily on "ease of play", especially for those less familiar with narrative conventions. There are some upcoming additions and updates I'm working on that hopefully address that issue (as well as general accessibility improvements).

If/when you get a chance to play it let me know how it goes! There's been a little playtesting here and there, but I would love to see how a game where I am not actually directly involved in goes!

Reply
Games by Mitch2 years ago 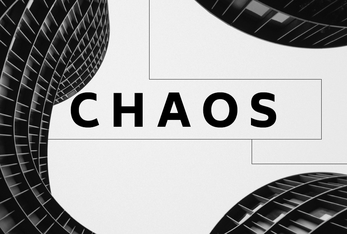 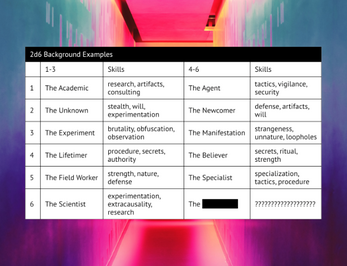 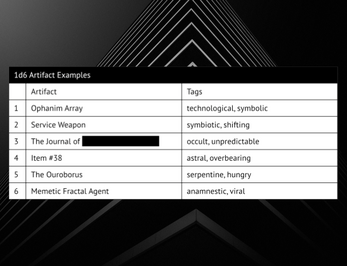 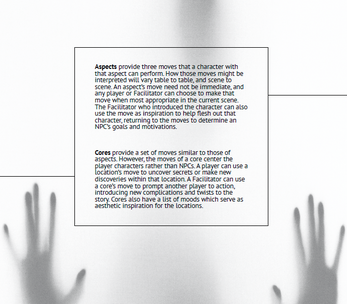 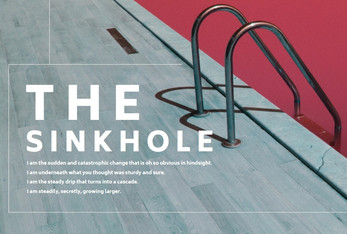 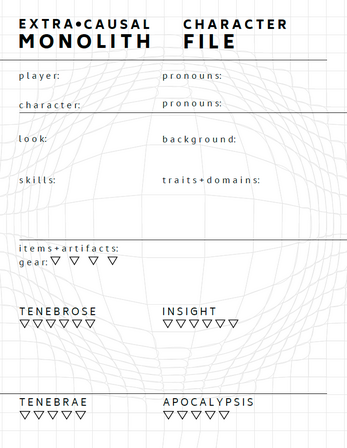 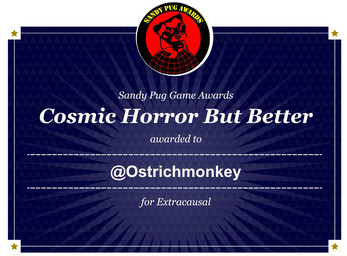